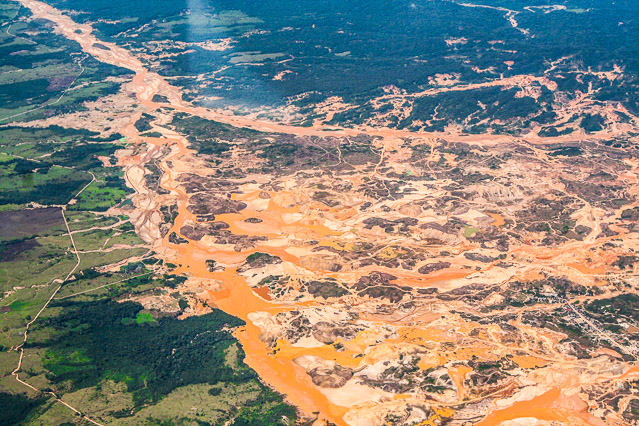 A new study found unsafe amounts of mercury in fish and people in Puerto Maldonado, the capital of Peru’s southeastern Madre de Dios Region. Average mercury levels in nine of the 15 most commonly consumed fish species were above the limit recommended by the U.S. Environmental Protection Agency. Farmed fish had the lowest levels, according to Luis Fernández of the Carnegie Institution for Science’s Global Ecology Program at Stanford University in the United States, who led the study.

Seventy-eight percent of adults tested in Puerto Maldonado had levels that were more than twice the recommended limit for humans. The highest levels – three times the recommended threshold – were found in women of childbearing age. That is especially alarming, because mercury can damage the developing fetus’ neurological system.

In a way, the results are not a surprise – accumulation of mercury from unregulated gold mining in waterways in Madre de Dios has been widely reported in recent years. But this is the most comprehensive study so far of the impact on fish and the humans who eat them, and it paints a stark picture that is hard to ignore. The study also busts some myths I’ve heard about mercury exposure in Madre de Dios:

Myth 1: All this talk about mercury exposure is just a way for environmentalists to demonize small-scale and artisanal mining.

Wrong. This is science, not lobbying. There is plenty of scientific and medical evidence of how mercury gets into the food chain and its harmful impact on the nervous system, especially of fetuses and children. Smaller studies in Peru, by the Ministry of Production, Ministry of the Environment and CENSOPAS, have also found mercury in the food chain, but this is the largest study so far. Fernández is a tropical ecologist who has studied the impacts of gold mining in both Brazil and Peru. The study was covers both urban and rural areas, and includes fish sold in markets and caught in the wild.

Myth 2: If I don’t live in a mining camp, I’m not exposed to mercury.

Don’t bet on it. If you eat mota, zúngaro, puma zúngaro, doncella, chambira or several other popular fish sold in markets in Puerto Maldonado, you are absorbing high quantities of mercury. Amazonian fish migrate up and down the rivers, so a fish caught far from a mining camp could still test high for mercury.

Myth 3: Fish aren’t really a problem, because most miners are from the highlands and don’t eat a lot of fish, and people in the city mainly eat farmed fish.

Not true. In this study, 92 percent of the people interviewed said they consumed fish regularly. Two-thirds said they consumed at least one high-mercury fish species every week, and 25 percent listed two or more of the high-mercury species among their three favorite fish. The farmed fish that are lowest in mercury are not necessarily people’s favorites.

Myth 4: I don’t eat fish, so I’m not at risk of mercury exposure.

Not necessarily. The study found mercury even in the hair of some people who said they did not eat fish. The researchers suspect that exposure comes from emissions from gold shops, which heat gold to vaporize any remaining mercury before weighing it to determine the purchase price. Many shops have inadequate filter systems or none at all. Fernández was part of a team that measured emissions from gold shops and introduced a simple filter that can drastically reduce mercury emissions.

Myth 5: All this talk about mercury is exaggerated – I’ve eaten fish or worked around the mines for years and am perfectly healthy.

That’s not the point. Doctors don’t question mercury’s toxic effect on the neurological system. Visible symptoms come with acute exposure, but lower levels also do lasting damage. Mercury has also been linked to cardiovascular and kidney problems. The real tragedy in Madre de Dios and other areas where miners and local residents are exposed to mercury is that the problem is ignored because the symptoms are not obvious. Children, who are at especially high risk, will only be protected if adults take action.

So what should be done? A long-term, intensive public information campaign is needed in rural and urban areas, so people know which fish are safe to eat and which are not. This could have a serious impact on the fishing industry in Madre de Dios, so fishing families will need help to develop alternative sources of income.

The short-term economic impacts could be considerable, but the long-term impacts – in increased health care, lost work and lost years of life – may be even greater. And there is a serious ethical issue: as long as authorities, miners and other citizens fail to reduce mercury exposure, children’s lives are at stake.