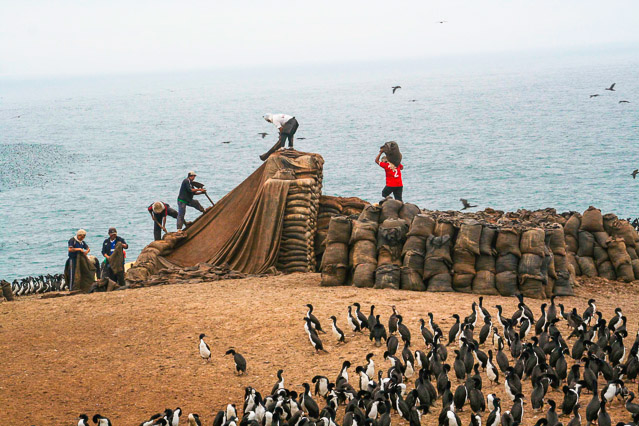 Along the Peruvian coast is a string of rocky islands and peninsulas that are home to guanay cormorants, boobies, and pelicans. The birds leave the islands every morning to feed on the fish, especially anchovies, that are plentiful in theHumboldt Current. They return in the afternoon. There is no vegetation on the islands, so they build their nests out of guano and feathers, adding a new layer every year. By the time Europeans first saw the islands, the guano was more than 100 feet deep in places.

Rich in nitrogen and phosphorus, guano makes great fertilizer. The Incas used it to improve their fields, prohibiting anyone from disturbing the birds and sending laborers to gather guano and carry it inland. In the 19th century, the bird poop was so valuable that countries went to war over it. Overharvesting of guano and overfishing of the anchoveta that is the staple of the guanay cormorant’s diet caused the population to drop from about 30 million birds in the 1950s to about 4 million today.

The guano is still harvested for fertilizer. AgroRural, the Peruvian government agency that manages the islands, coordinates the harvest, trying to schedule the work to minimize disturbance during mating and nesting season. The guano islands and peninsulas are now a protected area, benefiting not only the sea birds, but other marine life.