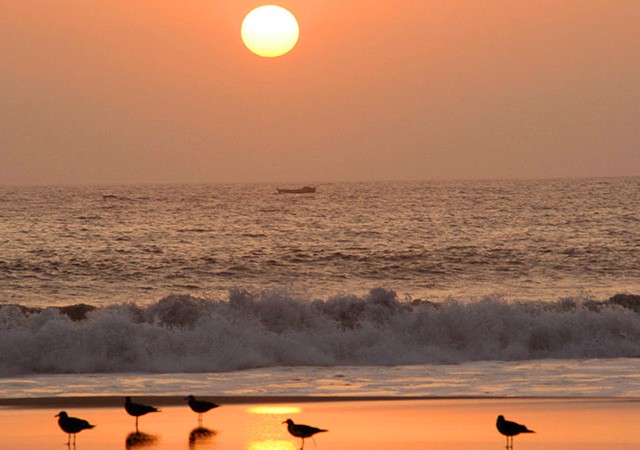 Peru’s coast is a long strip of desert cut in more than 50 places by seasonal rivers that flow from the Andes to the Pacific Ocean. But the coast has not always been arid. After South America broke away from Africa and the rest of Gondwana, the west coast was marshy. The uplift of the Andes Mountains, however, cut off the flow of moist air from the east, creating a rain shadow – an area where rainfall is scant to non-existent – and turning the coast into an arid strip of land with ocean on one side and mountains on the other. Chile’sAtacama Desert is one of the driest places on earth. The Peruvian desert, which is the northern extension of the Atacama, receives only about half an inch of precipitation annually. But while little moisture crosses the Amazon, the western Andean foothills do receive some moisture in the form of fog known as garua, creating an unusual ecosystem known as lomas.

Despite the harsh, dry conditions, many civilizations have flourished on the Peruvian coast. Many historians believe their rise and fall has been influenced by extreme weather, including weather influenced by the El Niño current, which periodically brings heavy rains to the usually arid coast. The river valleys provided arable land for crops, and both water and waterfowl were available in wetlands near the mouths of many of the rivers. Most of those wetlands have disappeared because of urban development, but some, like the Pantanos de Villa south of Lima, are protected areas.

The unusual equatorial dry forest ecosystem on the northern coast, in parts of the departments of Tumbes, Piura and Lambayeque, is home to endemic species of birds and vegetation especially adapted to the high temperatures and scant rainfall. The algarrobo tree (Prosopis spp.) predominates, forming forests where its roots can reach subterranean water sources. Other species include ceibo (Eriotheca discolor), sapote (Capparis angulata), porotillo (Erythrina velutina) and huarango (Acacia macracantha). Dry forests are under pressure from urban expansion, farm settlements and the charcoal trade. Charcoal made from algarrobo wood is often used as fuel in restaurants featuring spit-roasted chicken. Fauna includes deer, squirrels, lizards, foxes and a number of birds, including endemic species such as the white-winged guan (Penelope albipennis). The guan, once believed extinct, was rediscovered and has been reintroduced in several protected areas.